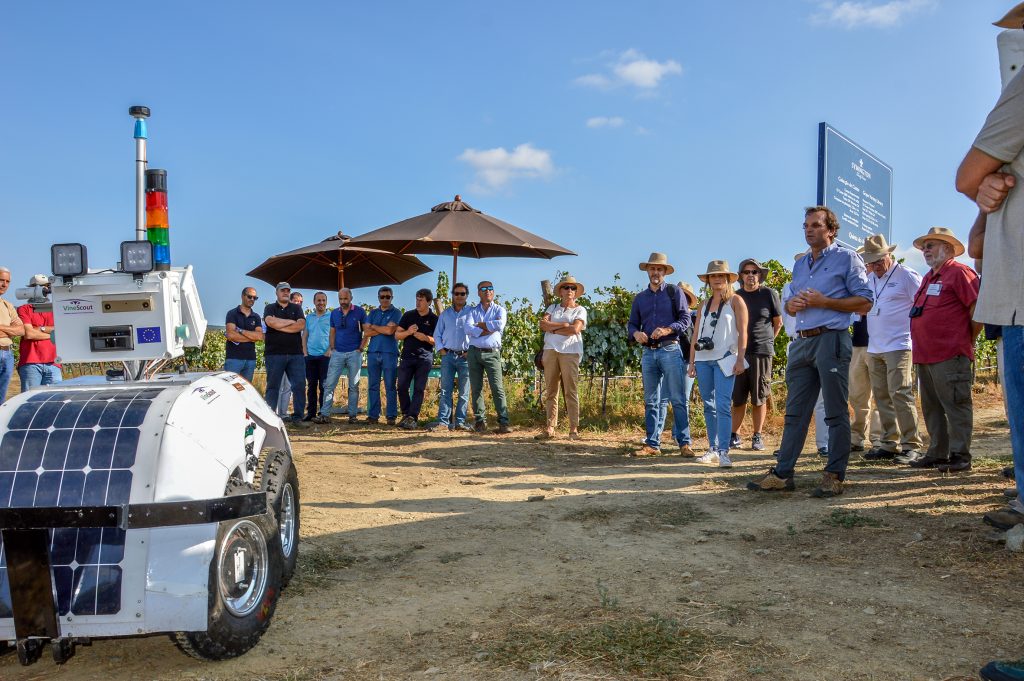 Charles Symington welcomes participants to the VineScout 'Agronomy Day' During the last week of August, the Vinescout vineyard monitoring robot was back at Quinta do Ataíde in the Vilariça Valley to undertake the third and final round of summer field trials for 2018. The three-year project, which is working to develop an autonomous vineyard robot that can aid wine producers in measuring key vineyard parameters, is now in its second year of development and the five members of the project consortium are very satisfied with progress made. The VineScout II prototype was first trialled this summer during mid-July and beginning of August, and on its return to Ataíde for the third stage of testing, some learnings from the previous trials were incorporated. Balancing weights were fitted to the front wheels to improve traction and balance and special protective cover guards were designed to keep transmission bearings free of the fine powdered Douro schist which can wreak havoc with moving parts. 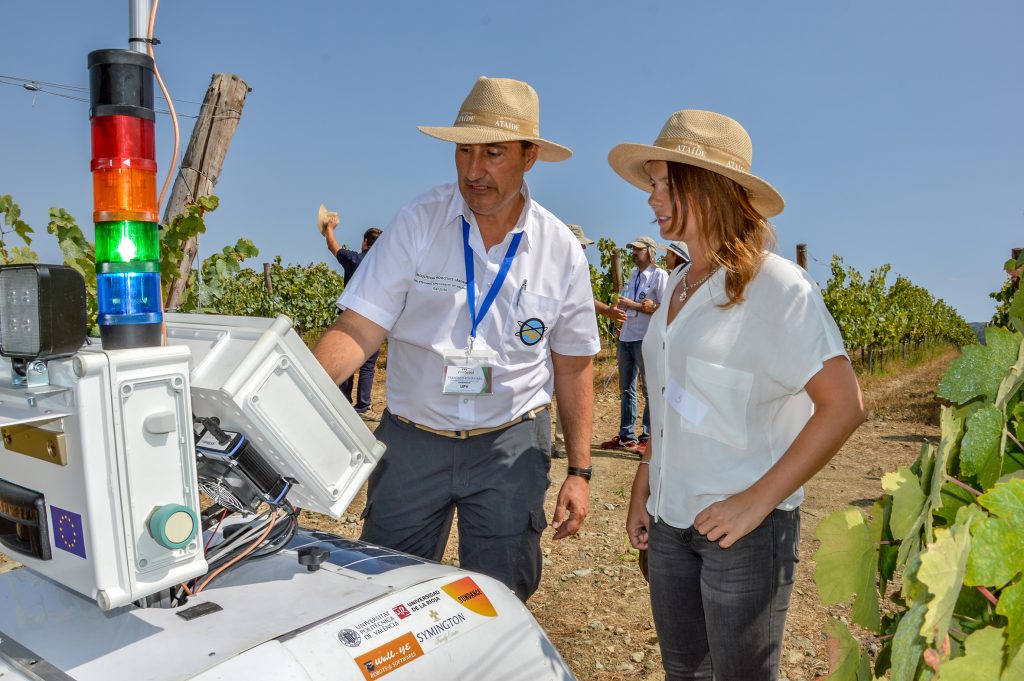 Professor Francisco Rovira-Más, VineScout consortium coordinator explains how VineScout works On August 29th an open day — ‘Agronomy Day’ — took place at Quinta do Ataíde to publicly present VineScout II. Turnout was excellent, not just in terms of numbers, over 50 guests attended, but also in regard to the diversity and calibre of those present. The academic world was well represented with senior figures from several Portuguese universities, the leading Portuguese technology innovation incubator, INESC-TEC, tech companies, the Regional Director of the Ministry of Agriculture, wine producers, international business consultants, as well as journalists from Portugal and overseas. Very encouraging was the presence of Dr. Thomas Engel from the John Deere European Technology Innovation Centre in Germany and Marc Vanacht, a leading US-based International business consultant with strong links to agriculture and food chain companies. Marc, whose professional life obliges him to travel widely and frequently, commented that, to his knowledge, there is no robot in viticulture as advanced as VineScout — anywhere in the world. The morning session of Agronomy day provided guests with the opportunity of seeing VineScout being put through its paces in the vineyard at Ataíde, namely in rows of the research vineyard which the Symington family planted there in 2014 and which comprises 53 red and white grape varieties. Participants in the open day were given the chance of interacting with the robot and with the various consortium members of the project and the two-way discussion was productive and valuable for all concerned. In the afternoon session, members of the teams involved with the robot’s development presented their findings from this year’s intensive field trials. 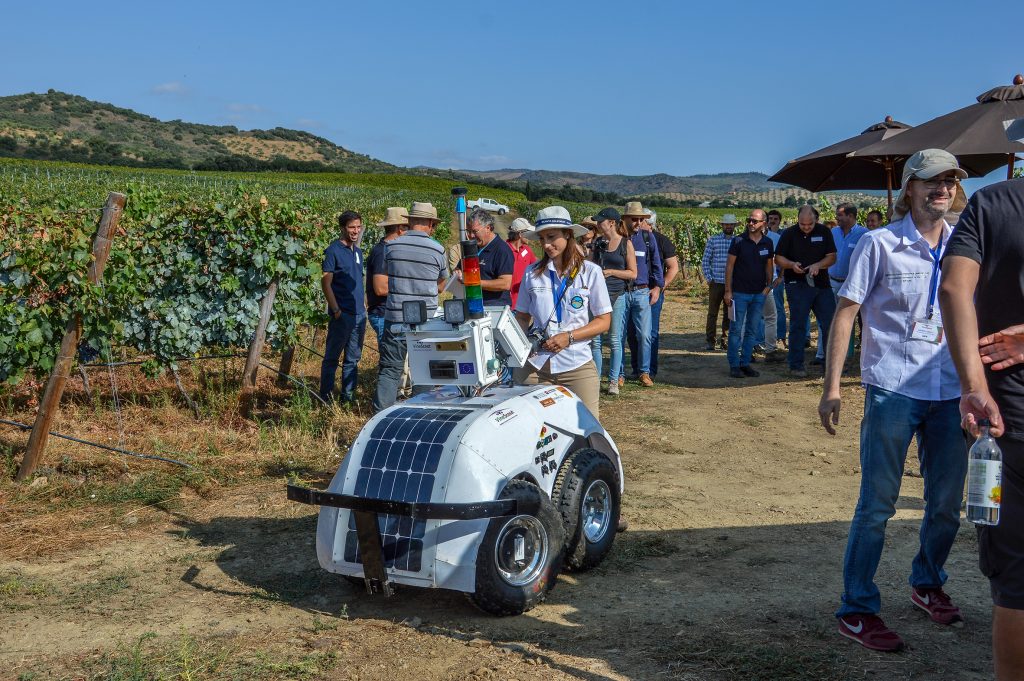 VineScout is programmed to navigate autonomously among the rows of vines to collect data The robot’s incredible vineyard mapping capabilities were discussed and the positive impact this can have on wine producers’ vineyard management became evident. One comparison between what is currently available and what the robot can bring to wine growers really summed up the promising potential of this project. While existing vineyard mapping/monitoring technology is limited to taking readings from a reduced number of sampling points (about 25), VineScout is able to take 3000 readings in a comparable vineyard area and in the same time period. Furthermore, it does this automatically. The scope and possibilities that this opens up in terms of impacting the quality of the end product is nothing short of impressive. VineScout will return to the Douro in the summer of 2019 in the form of prototype III for further and final field testing. The project will be concluded by the end of the year by which time it will have evolved to a point where the stakeholders are confident it will be ready to advance to the next stages: series production and market availability. 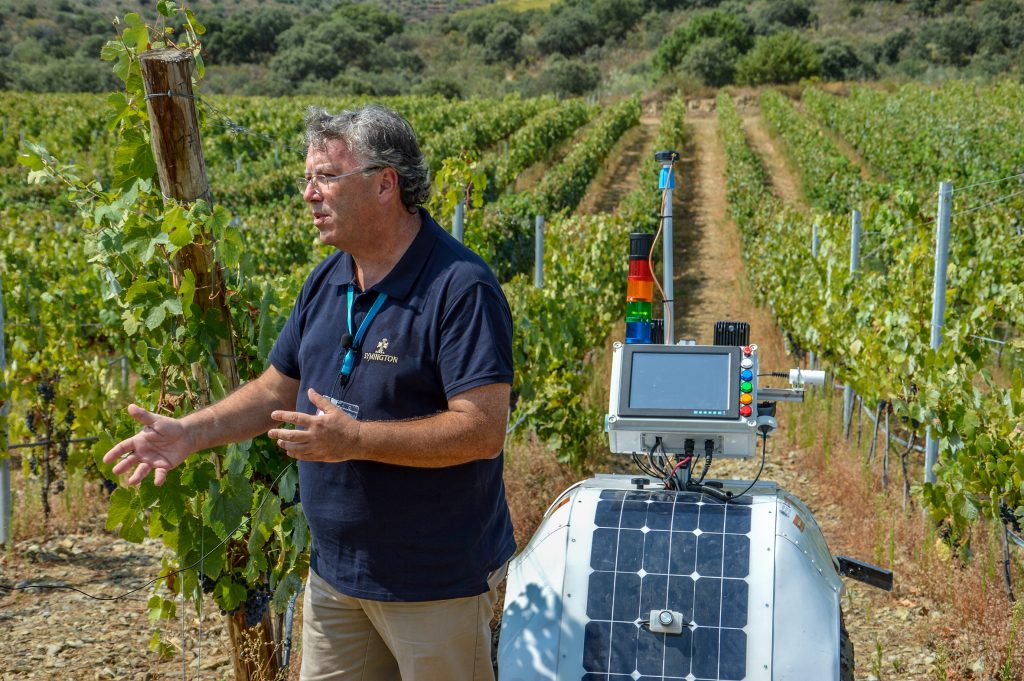