This bulletin covers the spring of the 2021-2022 viticultural year, although we’ve only included the period from April to June because March was included in the previous (Winter) bulletin. Spring temperatures were a bit of a mixed bag in the Douro this year, starting off unseasonably cool in early April, then climbing sharply during May, whilst June had a very hot first half and a cooler second half. Rainfall was mainly well short of monthly averages, with May being exceptionally dry.

Fig.1: Average temperature and precipitation % departure from normal at Pinhão (Bomfim).
Comparative figures for the months of April to June 2022 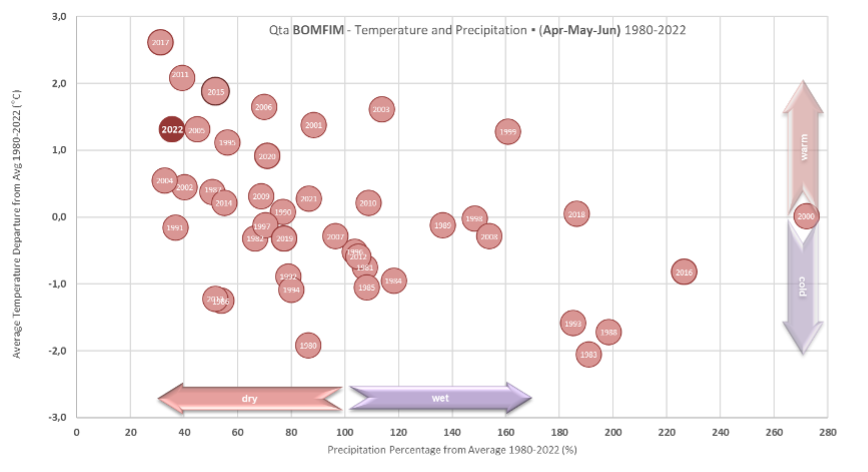 April temperatures were lower than average throughout the Douro and this was particularly evident during the first week of the month in the Douro Superior, with Quinta do Ataíde recording a minimum temperature of -1.8°C on April 2nd. Rainfall measured across our eight weather stations in the Douro was roughly between 60% to 80% of the monthly averages, insufficient to reverse the continuing reduction of soil water content, which stood at 19.4% — nearly 10% lower than for the same period a year before.

In May, temperatures across the Douro rose significantly, particularly in the Cima Corgo, where the most pronounced deviation from the 30-year-average was recorded at Cavadinha (+4.7°C), followed by Malvedos (+3.6°C) and Bomfim (+3.5°C). To make matters worse, rainfall was negligible in the Cima Corgo quintas (30-year-average monthly figure shown in brackets): Bomfim, 4mm (45.8mm); Cavadinha, 2.8mm (50mm); Malvedos, 4mm (48mm). Contrary to what one would expect, the Douro Superior quintas fared much better, with rainfall close to 50% of the monthly average. Unsurprisingly, soil water levels dropped even lower, to an average of just 15.4% — close to the tipping point for the soils to dry out completely (by comparison, at the same time last year, soil water content was a little more than double: 34%).

Weatherwise, the month of June can best be described as asymmetrical, with a very hot first half that brought a heatwave to the Douro and Alentejo, lasting for seven days in the Cima Corgo and nine days in the Douro Superior (and Portalegre). The Bomfim weather station recorded maximum temperatures just above 40°C on the 13th and the 15th (see graph below). This was counterbalanced by a much cooler second half of the month with unexpectedly low minimum temperatures that levelled out the month’s average, placing it on a par with the 30- year-average for Bomfim (22.7°C and 22.4°C, respectively). On June 26th, the minimum temperature recorded at Bomfim was an unusually low 10.1°C. Rainfall at most of the quintas was again well short of the mark apart from Malvedos, which was very close to the monthly average for that property (25.8mm compared to the 30-year-average of 30.6mm). For the viticultural year thus far (i.e., accumulated total between November 2021 and June 2022), we have had 70% less rainfall than average (Bomfim weather station). The rainfall deficit at Quinta da Fonte Souto isn’t quite as bad, at 55.2%.

Flowering and fruit set: Flowering was recorded in our control vineyard parcels at the Quinta do Bomfim and Quinta do Ataíde Grape Variety Libraries between the 12th and 16th of May, approximately a week later than in 2021, although two to four days earlier than average (for the two locations). Fruit set occurred during a very hot and dry period, which resulted in some desavinho (poor pollination of the vines’ flowers, which can impact the size of the crop). 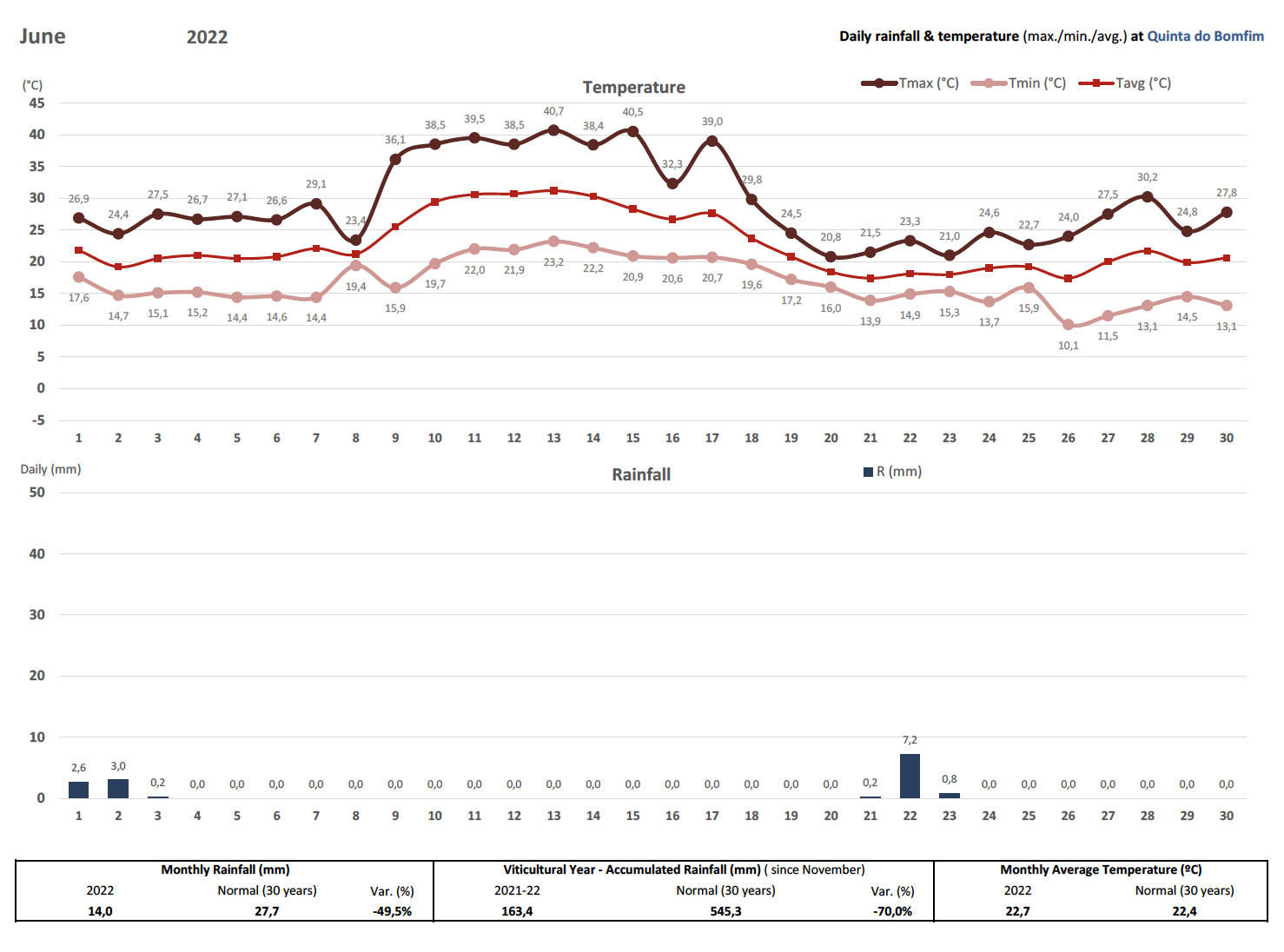 Soil water readings taken by the probes at Bomfim show a difficult situation for the vines; since the end of May, soil water levels are at the very limit of the plants’ capacity to access any moisture. At the end of June, soil water content stood at just 13.5%, a level that last year was only reached during August. Essentially this means that we are currently just below the threshold of ‘Readily Available Water’ for the vines (see chart below). 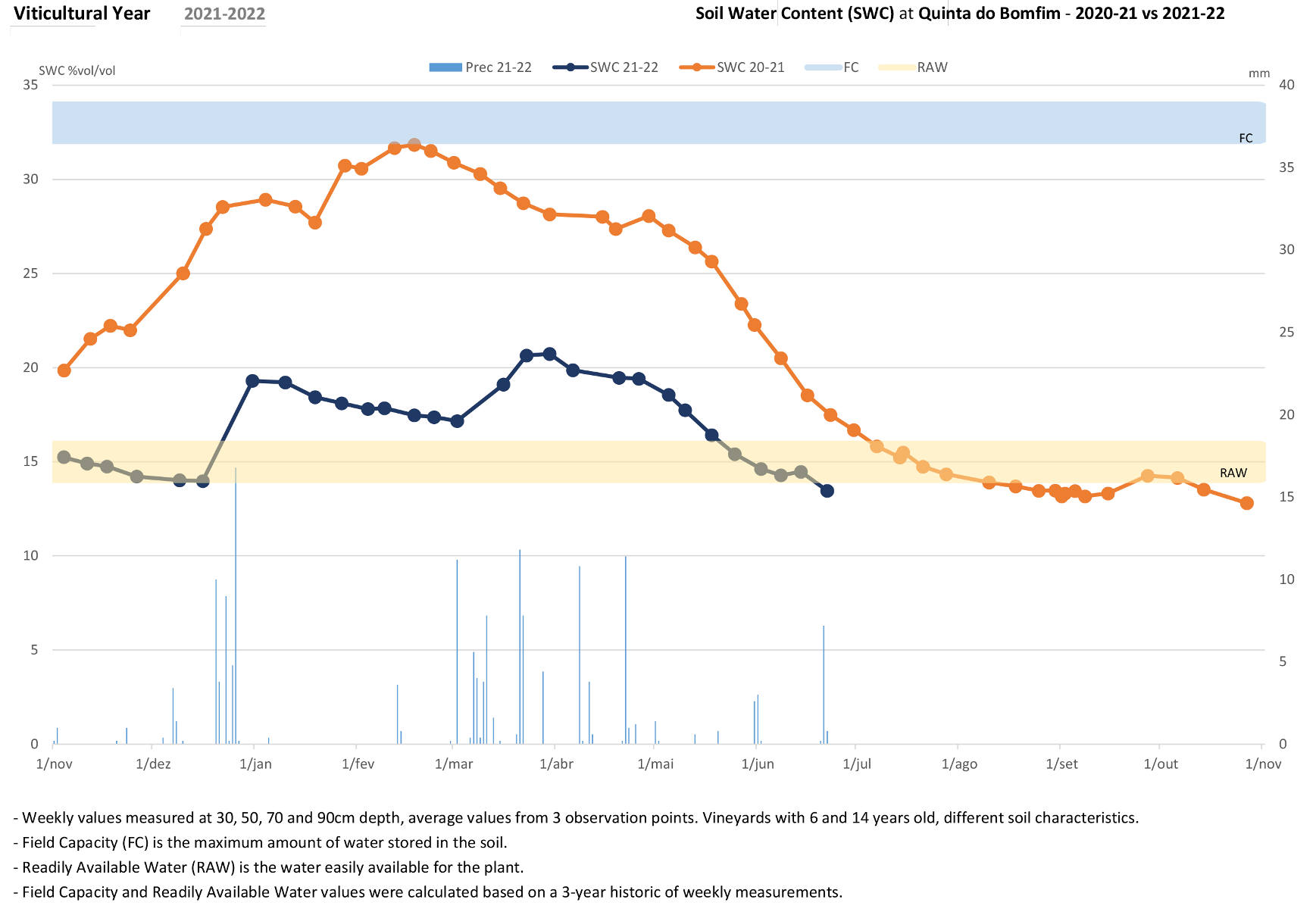